In 1919 the Company donated the Kanematsu Memorial Hall, now the Research Institute for Economic and Business Administration, to the then Kobe Higher Commercial School (the present Kobe University). The building (completed in 1921) was constructed at a cost of 300,000 yen, which translates into about ¥420 million in today’s money under a simple calculation of the currency’s inflation since that time (consumer price basis). An endowment of 300,000 yen was also made to Kobe Higher Commercial School for the founding of the Kanematsu Foundation for the Research of Foreign Trade. A second endowment of 200,000 yen relating to the Foundation was made in 1940.
Throughout its more than 80 years of existence, the Institute has operated as a body for intensive research into the international economic system and related managerial issues. The Institute is renowned, not only in Japan but also internationally, for the extensive research findings it has produced.
In 1993, the Kanematsu Fellowship - a Kanematsu postgraduate research scholarship -- was jointly established by the Kobe University Research Institute for Economic and Business Administration, the Kanematsu Trade Research Fund, and the Company. The fellowship solicits prize-winning essays each year, providing research scholarships for graduate students from all over Japan in addition to the opportunity for research publications.

The Research Institute for Economic and Business Administration of Kobe University

In August of 1927 construction was completed of the Kanematsu Auditorium of the Tokyo University of Commerce, now Hitotsubashi University. The building was designed in the Romanesque style. It is said that all of Kanematsu’s employees donated their bonuses to this project.
The Kanematsu Auditorium is a precious part of Japan’s 20th century cultural heritage, and in 2000 the building was chosen as one of the country’s registered tangible cultural properties. Extensive restoration work on the building was undertaken in 2003-2004, funded largely by donations from the university’s alumni as well as from Kanematsu itself. As the acoustic properties of the hall have always been excellent, in addition to its main purpose as a lecture hall, it has also frequently been a venue for chamber music concerts. 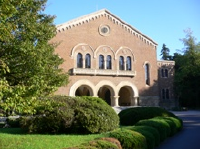 Construction of the institute was begun in 1929 after receipt of a donation from Kanematsu, and completed in 1933. The history of Kanematsu is inextricably bound up with Australia, as Company founder Fusajiro Kanematsu in 1989 established Kanematsu’s predecessor company as a specialist Japan-Australia trading house. Fusajiro Kanematsu, who passed away in 1913, was not only responsible for building the foundations of trade between Japan and Australia, he also made a number of significant contributions to Australian society. During the Second World War, the Australian government prohibited the use of Japanese names for products, businesses and so on, as it was the language of the enemy.
An exception was made in the case of the Kanematsu Memorial Institute of Pathology, however, partly at the vehement insistence of the Director of Sydney Hospital. The Kanematsu Memorial Institute of Pathology has thus continued, to this very day, to bear the name of the Company’s founder and to use the Kanematsu family crest.
The Institute is a highly respected one among the global medical fraternity, and has produced two winners of the Nobel prize for medicine: Sir John Carew Eccles in 1963, and Sir Bernard Katz in 1970.<    In 1982 the Institute was separated into four sections, one of which - specializing in clinical testing of blood disorders, microcirculation studies, and histopathology at the Royal Prince Alfred Hospital on the campus of Sydney University - retains its links with our Company through the use of its current name of The Kanematsu Laboratories.