-Kanematsu takes on another challenge for further growth-

Since the announcement of VISION 130 as its scenario for further growth toward the next stage in May 2014, the Company has steadily implemented measures for achieving the targets based on this vision. The Company revised VISION-130 partially to update it on this occasion following the conclusion of its three-year medium-term business plan in the fiscal year ended March 2016 and in response to significant changes in external conditions, including the slowdown of the Chinese economy, flagging crude oil prices, and the depreciation of the yen and high share prices caused by the economic policies known as Abenomics.

The Company aims to maintain a sound financial standing and strengthen its management foundations based on VISION-130 from this point on. At the same time, the Company will work to expand its earnings base through coexistence and joint development with its customers. The Company will strive to bolster its corporate value further through its initiatives, including investment in new undertakings, positioning VISION-130 as another challenge for Kanematsu for furthering growth and deepening operating fields where the Company has advantages.

「VISION-130」Main points of the revision

◆Keep aiming to achieve consolidated net income of 15 billion yen by concentrating earnings targets on net income with the introduction of the International Financial Reporting Standards (IFRS) in the fiscal year ended March 2016.

◆At the same time, add numerical targets as a basic concept for shareholder returns and clearly state the stable and continuous payment of cash dividends with a consolidated payout ratio of 25% as the goal. 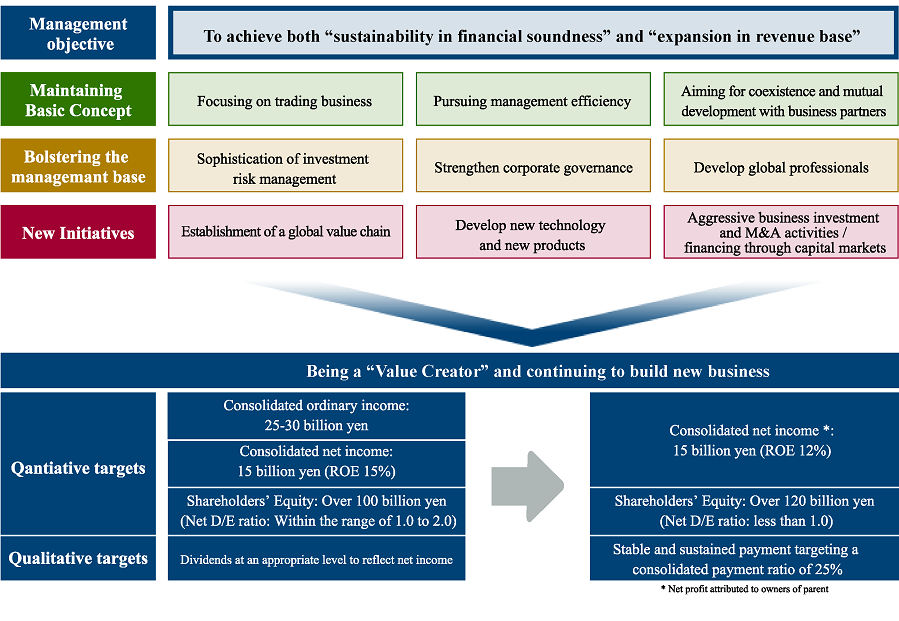