Origin of Kanematsu -Trajectory of Fusajiro Kanematsu, the Founder- 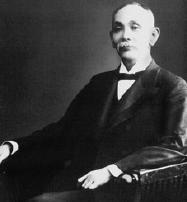 During a time when the lifespan of a person was considered to be 50 years, Fusajiro Kanematsu made a major step toward trade with Australia when he was 44 years old. His way of life was a continuous challenge, with an eye to the future of Japan.
In 1845, Fusajiro was born in Osaka, Japan. He foresaw the arrival of a new era at the time of disorder at the end of the Edo period and was determined to live as a merchant, not a samurai (warrior).

At the beginning of the Meiji Period, in 1873, when trade in open ports was rapidly becoming active, Fusajiro, then 28 years old, joined the Osaka Branch, Bank Division, Mitsui Gumi (now Sumitomo Mitsui Banking Corporation), where he began working as an apprentice. His sincere, proactive efforts bore fruit. He introduced transactions in private money that banks did not deal with at the time, and achieved strong results and gained trust. He then left the job at Mitsui and participated in founding Osaka Shosen (now Mitsui O.S.K. Lines, Ltd.) in 1884, and became a director for the purpose of activating the sea transportation industry centered on Osaka. In 1887, he purchased Osaka Nippo (renamed Osaka Mainichi Shimbun in the following year). He provided a breath of fresh air to newspapers that were biased toward the political power at that time and launched a business newspaper for the development of the industry. He attempted novelty, including the introduction of a price list and the opinions of private companies. In this way, Fusajiro’s way of life held on to the consistent thought that he was dedicated to entrepreneurship or the industry of Japan.

At the time, nearly 90% of Japan’s imports and exports were dominated by foreign firms. Fusajiro was full of ideals and hopes that trade was the only way to enhance Japan’s national strength, and that the trade rights for imports and exports must be brought back to the Japanese. He turned to Australia, which was a reservoir of livestock and mines and was the largest wool-producing country in the world. In 1887, Fusajiro visited Sydney, Australia for the first time for an on-the-spot study and determined, “Here is the future field of action for me, and I will also achieve a path for prosperity of Japan.” In 1889, at the age of 44 years, he founded Fusajiro Kanematsu Shoten of Australian Trading (now Kanematsu Corporation) in Kobe, Japan. The following year, he went to Australia and opened a branch office in Sydney. Although he was not familiar with the state of affairs and customs in Australia and had no friends he could trust, he shipped beef fat, cattle hides and wool to Japan for the first time to take the first step toward direct Japan-Australia Trade.

Later, Fusajiro met with many difficulties including the Great Depression, but he worked hard to avoid anything that would extinguish trade between Japan and Australia. His enthusiasm moved people, and Kanematsu Shoten found a way out.
No matter what obstacles he faced, Fusajiro followed the path he believed in and devoted half his life to Japan-Australia Trade.

The teachings of Fusajiro, who is known as “the pioneer of trade with Australia,” can be found in the current management principles and are instilled in the DNA of the employees of Kanematsu. The following are the sayings left behind by the founder, Fusajiro Kanematsu.

“Let us sow and nurture the seeds of prosperity for Japan”

This is Fusajiro’s expression of his determination in August 1889, when he founded Fusajiro Kanematsu Shoten of Australian Trading (now Kanematsu Corporation) at the age of 44 years. For the Japanese in the Meiji Period, the “Welfare of Japan” was a common social ideal for the development of the economy. In recent years, this has been replaced with benefits for the general public, social contributions, contributions to international society, and contributions to humanity, and it is widely advocated as the management philosophy of corporations. In order to enhance the “Welfare of Japan” through trade with Australia, Fusajiro visited Australia as many as eight times after the foundation of his company and devoted his life to the development of the business.

This is a pet phrase of Fusajiro, who hammered home the spirit of placing importance on clients. This saying expresses the fact that customers are the most important aspect of trade and business. Customers are those who teach you tasks and from whom you make money, and purchasers and suppliers are also important customers.

Fusajiro was taught this phrase in his youth and made it into his belief for his whole life. Fundamentally, labor and reward should be balanced like debtors and creditors on a balance sheet. However, Fusajiro believed in working without withholding any effort, or rather with extra effort, regardless of income.

Profit is a By-product of Business

This is a phrase derived from enlightenment and belief, and the wisdom of life that the pursuit of money is not sufficient, even in business. Business people in the Meiji Period had the attitude that making money was not their objective, but that business had its ideal model and profit was a by-product. Fusajiro also held the view of business whereby “You must not think that you should do absolutely anything in order to make money.” His view surpasses money and leads to the social responsibility of corporations. 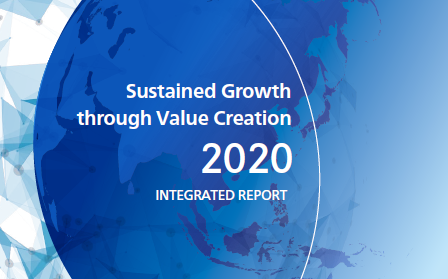